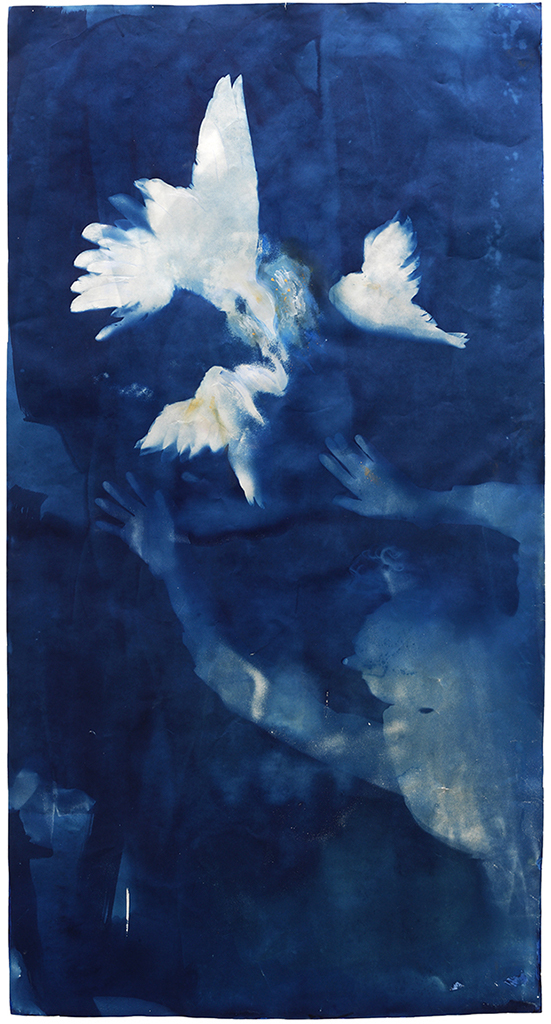 Featuring more than twenty pieces, the majority of which have not been shown previously, New Passagesinvestigates notions of navigation, migration, time keeping, and travel. Together the artists begin to uncover the metaphorical, philosophical, and personal meanings behind these ideas. Working separately, but on parallel paths, each artist gives visual form to the idea of “passage.” For Andrews, the concept embodies transition, directionality, motion, and time. In Holsberry’s work there is a connection to and fascination with the earth’s migratory movements.

For nearly two decades Andrews and Holsberry have occupied studio space in the same Emeryville cooperative. They have known each other as artists and friends, but have always worked independently, pursuing their own artistic investigations of various themes, forms, and materials. Andrews’ work reflects years of experience drawing and meticulously collecting disparate materials. She uses myriad objects—both natural and manmade—to create delicate and intriguing three dimensional works. Though sculptural in form, her creations are, in essence, tangible drawings. Like Andrews, Holsberry also utilizes a range of materials in her work. Yet, regardless of her choice of medium, Holsberry’s pieces maintain a graceful, painterly quality. There is elegance to her work that transcends her materials, finding its way into each carefully executed piece.

In her latest series, Andrews looks to instruments of directionality and time-keeping for inspiration. Spending hours researching compasses and sundials from around the world and across the ages, these forms become the jumping-off point for her creations. There is a relationship between the works she creates and the images and objects that inspire them, but the forms are never copied. Instead, they are translated, distilled, and transformed into new, hybrid objects built from a variety of materials. The completed works embody the artist’s reflections on the challenges of navigating the world physically, emotionally, and socially, yet they are open-ended and invite the viewer to lend his or her own interpretations to the work.

Holsberry’s recent series takes migration as its central theme, but does so in a way that is fluid and ever-changing. Using a combination of source materials—her Qi Gong meditation and movement practice, images from the Hubble Space Telescope, old maps, and her collection of nests, feathers, and other ephemera—Holsberry creates stunningly beautiful works that engage the viewer and encourage deeper reflection. Her pieces draw inspiration from nature and her fascination with migratory birds—which often appear as metaphorical symbols in her work—but her meditations on migration also delve deeper. Her works map emotional territory born from semi-annual trips to France and the experience of seeing family move to distant places.  Though deeply personal, Holsberry’s work maintains an important universality, drawing on the individual, yet shared, experience of moving from one place to another.